As I started to work on this job, I thought of a new method for making signs look old. It’s really not a new thing, signs have been aging like this for many years; but I’ve never done it before, nor have I seen anyone else do it. When a sign painter is asked to paint a sign, we use different graphic elements, old tricks in a hat if you will. The reason is to make a sign look more interesting, more appealing to read. One of those design tricks is what we call a panel. It’s usually a rectangle, but can also be an oval, or ribbon shape.

In this case, the blue panel could have been made reverse; or solid blue. Reverse means to take a small brush, and paint the blue around the letters, leaving the yellow exposed as the letter. Tedious, but all one step. Another way would be to use a bigger brush, paint the panel solid blue; then while it’s drying, go work on another part of the design. Then return with white or some other light value color, and paint the letters over the blue. What I opted to do here (the pictures are lousy, don’t truly show the effect) is the second method. But what would happen with 40 years of time is that the blue around the letters would fade, as well as the white letters themselves. What would be well preserved is the blue paint under the letters.

So the method is to paint the panel in the distressed way, and let it dry. Next, with a darker and more intense version of the same blue, paint the letters in a non-distressed way. Finally, very carefully paint distressed white letters over the blue letters, leaving the darker blue letter showing through the white in the places where the blue panel is faded the most. Again, the pictures don’t show how well it worked; but look at the top of the U, the right edge of the O, and the middle of the M. 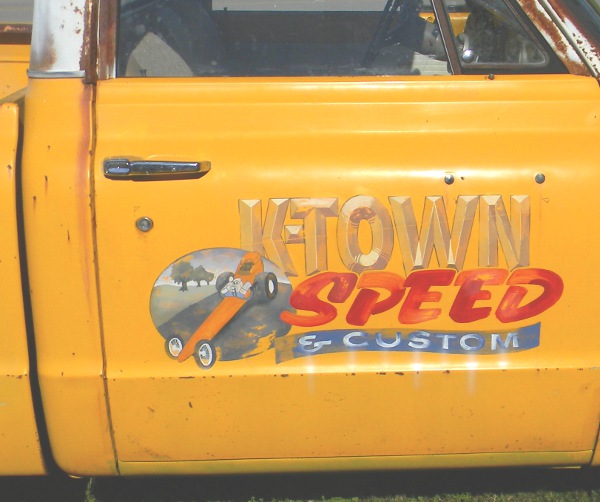 One thought on “Yellow Chevrolet Truck”

being noticed in Knoxville & East TN.